A chilling north-easterly wind was blowing as I left Cow Bridge and followed the shoreline path by Brotherswater. I had to move quickly, as I was only wearing a light fleece over my merino base layer, in anticipation of the steep climb to High Hartsop Dodd that I would shortly be facing. I still couldn’t resist an early photo though. 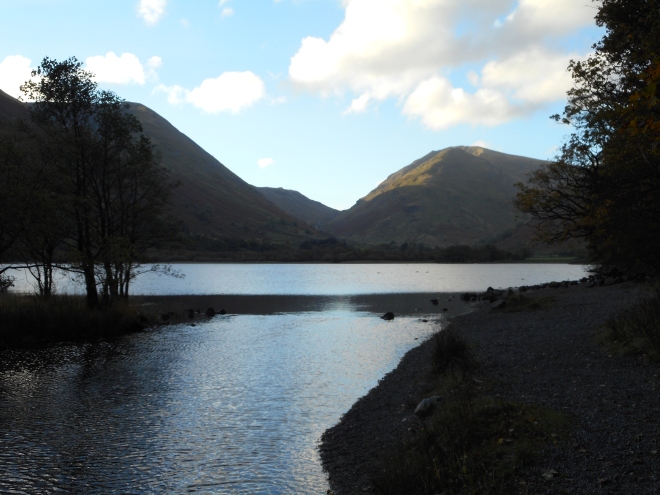 Passing Hartsop Hall, I was struck by the solidity of the stone pillars that held up one of the outbuildings. I love the traditional Lakeland farmhouses and find myself much more drawn to vernacular architecture than to the splendour of our great cathedrals or stately homes. 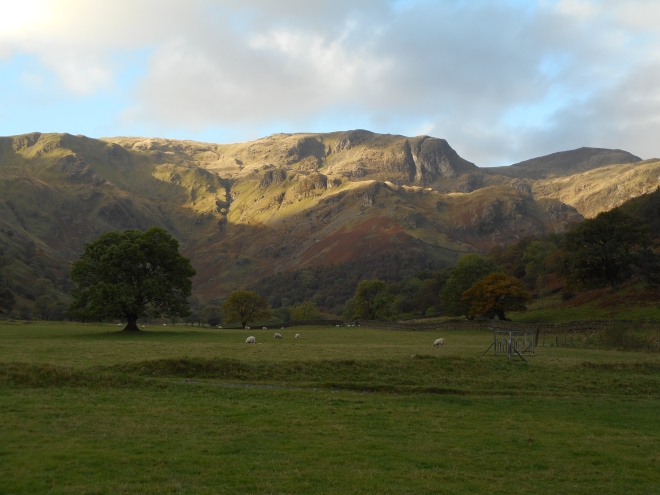 Within minutes, I had left the farmland behind and was tackling the relentlessly steep ascent to High Hartsop Dodd (1702 ft). As I expected, I soon felt very warm, despite the wind. Having said that, I needed an extra layer as soon as I reached the summit! The retrospective views were stunning and it was fascinating to observe the ever changing patterns of light and shade on the woodlands and hill slopes. 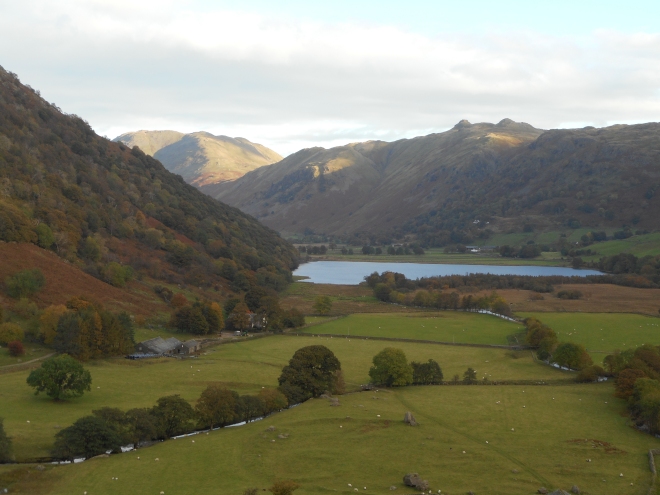 Looking back on Brotherswater, with Angletarn Pikes and Place Fell in the background 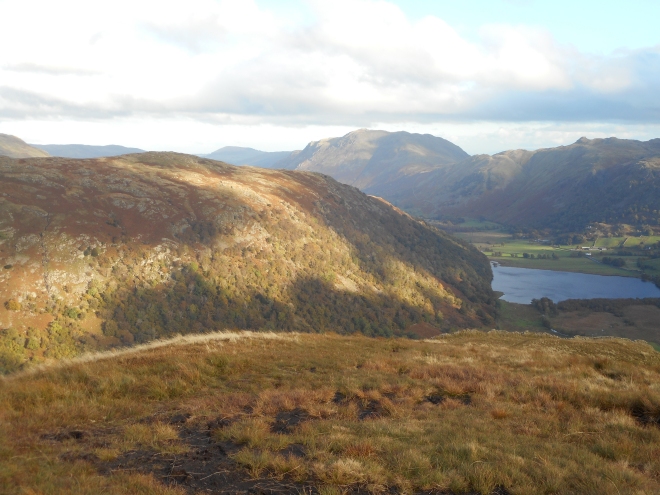 The onward ridge to Little Hart Crag (2090 ft) was a joy to tread and on reaching this next summit, I was able to see down into Scandale and towards Windermere. There were patches of sunlight here and there, and it was clear that the western half of the Lake District was enjoying better weather than the east. 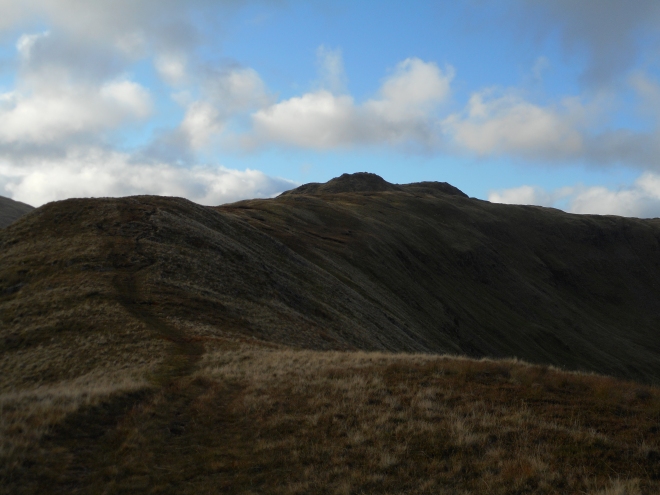 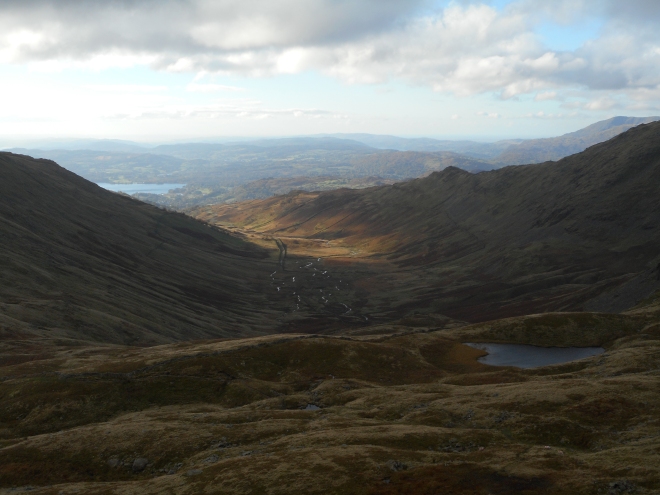 Looking down on Scandale; a glimpse of Windermere in the background 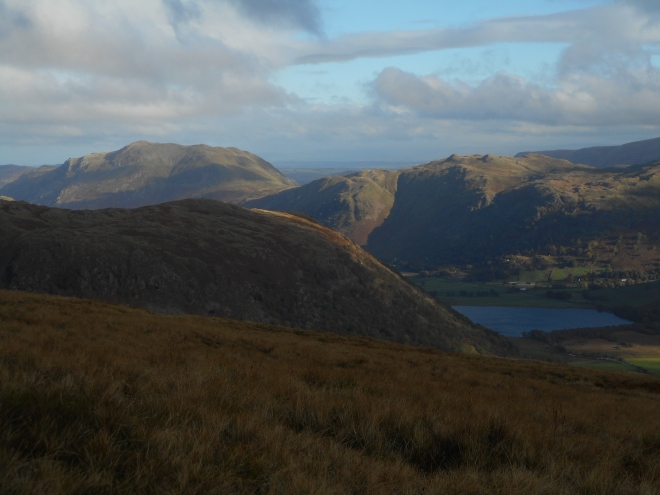 Another view of Brotherswater and Place Fell

The ascent to Dove Crag led me to the broader paths of the classic Fairfield Horseshoe route, which I planned to follow as far as Fairfield’s summit. I met a couple on the summit of Dove Crag (2598 ft) who planned to descend via the route I’d just come up, and they checked a couple of details with me before moving on. There was no let-up from the bitterly cold wind and so I pressed on towards Hart Crag (2698 ft). I could see that the mist was touching Fairfield’s summit, but I was confident that the wind would cause regular breaks in the cloud cover and allow me a view. 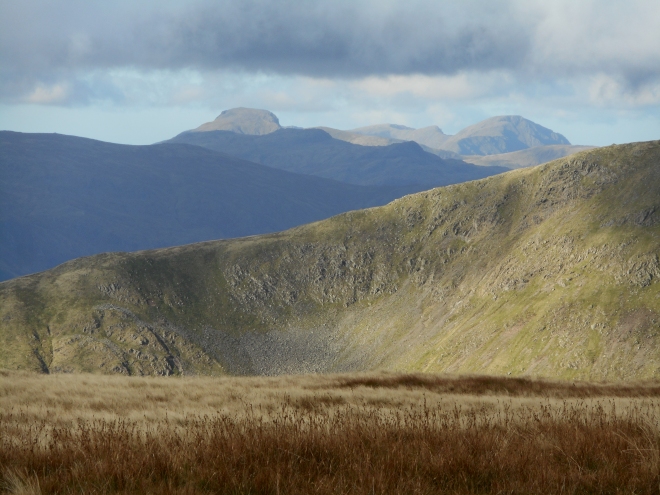 Zooming in on Great Gable and Dale Head

Approaching the summit of Fairfield (2863 ft), I found myself in the mist and was briefly dampened as a shower passed over. It didn’t last long though and as there was room at the summit shelter to sit in the lee of the wind, I decided to stop for an early lunch. This turned out to be a good decision as the cloud lifted almost as soon as I arrived, allowing more superb views across to Gable and the Scafells. They were bathed in golden sunshine, but I wasn’t jealous.

Leaving the summit, I was a little worried that the narrow ridge over Cofa Pike might be too exposed to the wind to cross safely.  Luckily this wasn’t the case, and I was soon climbing up to St Sunday Crag (2759 ft).  The sun was starting to shine by this point, so I was able to take my time and enjoy my surroundings a little more. 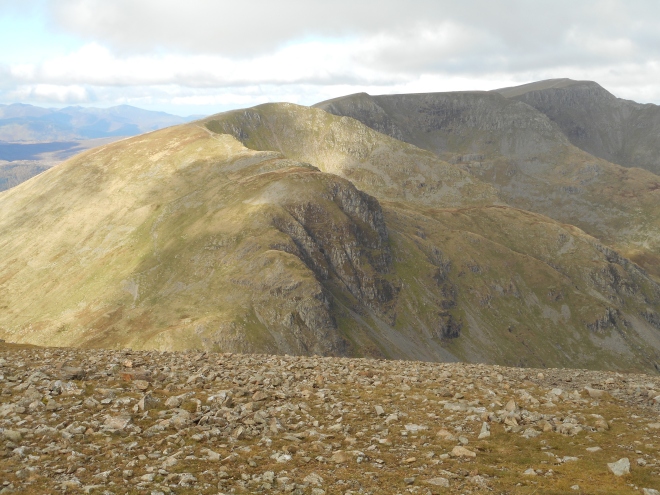 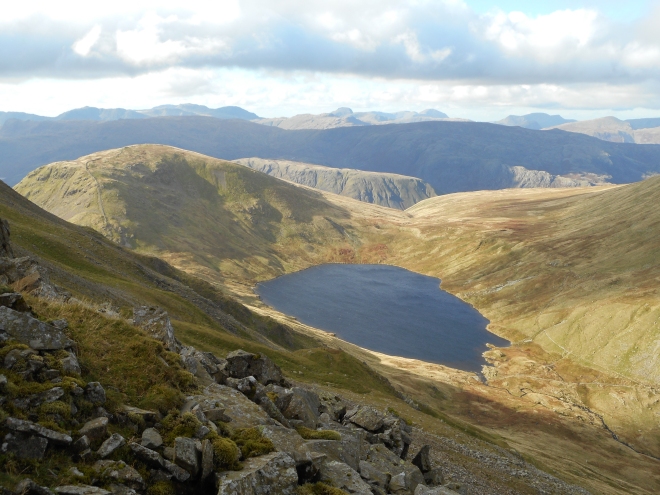 Grisedale Tarn and Seat Sandal, with the Scafells and Great Gable in the background 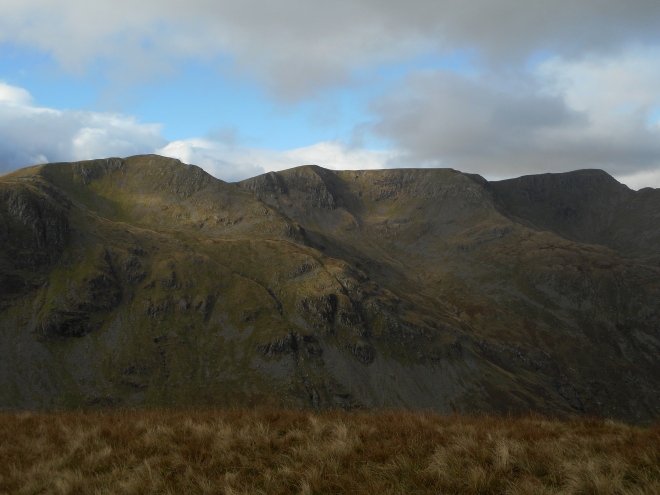 Another view towards Nethermost Pike and Helvellyn

Looking back towards Fairfield, I was particularly impressed by the tremendous prow of Greenhow End. It looked formidably steep from this angle, but apparently involves nothing more demanding than Grade 1 scrambling. I must return to explore it some time.

From St Sunday Crag, I dropped down to Gavel Pike and descended to Deepdale via the east ridge. I found an intermittent path in places, but it was obvious that this is not one of the more popular routes. It always amazes me just how many of these off the beaten track routes there are in the Lake District – yet how often I hear people describe the area as overcrowded! 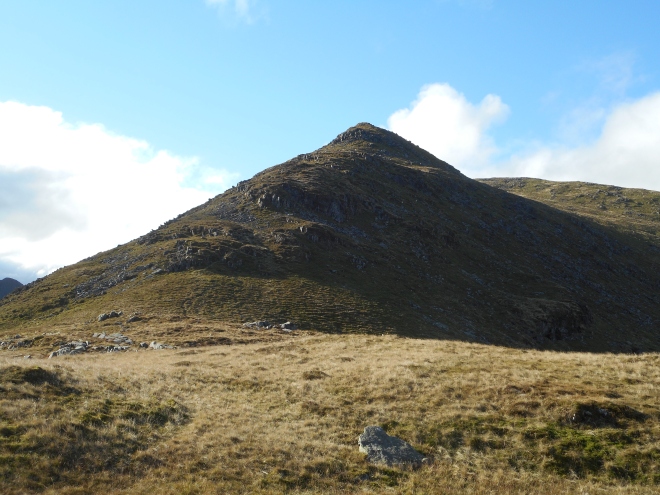 Looking back up at Gavel Pike from the east ridge 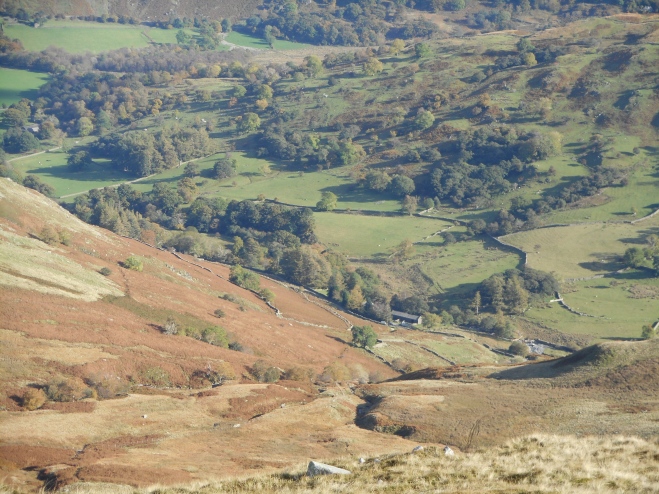 Mosaic of farmland and woodland on the valley floor 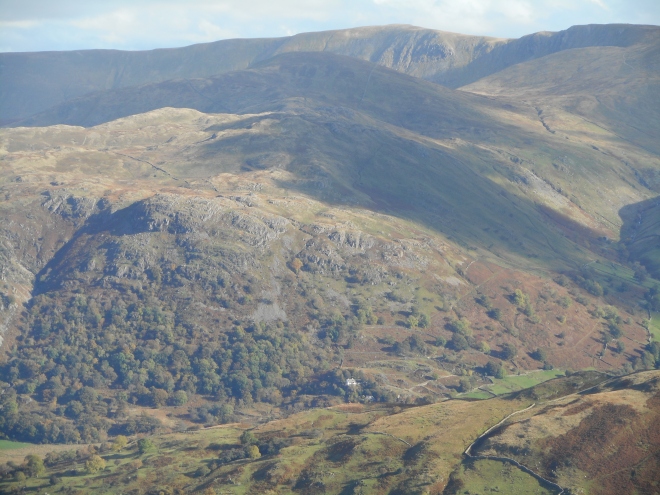 Looking over to Rest Dodd and High Street

Reaching the valley floor, a simple stroll down a farm track and through delightful woodland returned me to my start point.