Strangely enough, despite having lived in Otley for almost two years, I had never climbed Beamsley Beacon or Round Hill, even though I must have been able to see the latter almost every day.  Indeed, Round Hill must be as close to home as Ilkley Moor, yet I have walked on Ilkley Moor countless times.  Keen to remedy this omission, and looking forward to seeing the renowned views from Beamsley Beacon at last, we planned a route that would take us up to it from Bolton Abbey, along the ridge to Round Hill, and down to Ilkley for the bus home.  Although fairly modest in terms of distance (around 10 miles), we thought it would be enough for a short January day, particularly as we were expecting to find snow underfoot.  The weather forecast promised a largely bright and sunny day, but that turned out to be somewhat overly-optimistic…

Alighting from the bus at Bolton Abbey, we made our way across the river (using the bridge rather than the submerged stepping stones), and up the bridleway to Storiths.  Just as we reached the higher level path on the eastern side of the river, the snow began to fall, which did at least provide an atmospheric view down to the priory. 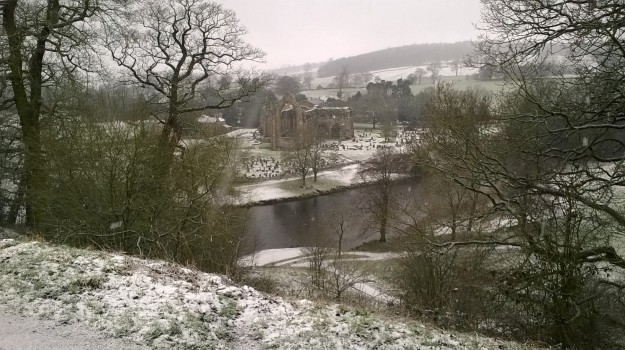 Undaunted, we made our way to Storiths and followed a pleasant field path across to the A59, before dropping down to Deerstones and ascending towards Beamsley Beacon from there.  Despite the snow, the paths were surprisingly easy to follow. 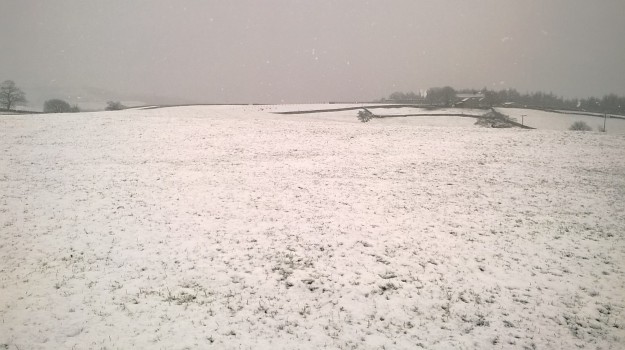 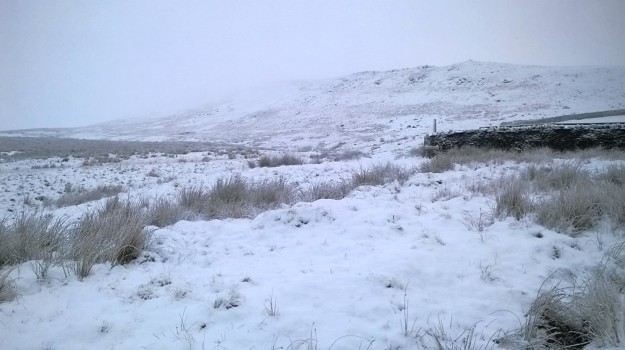 Looking up to Beamsley Beacon from near Ling Chapel Farm

On beginning the climb along the ridge to the beacon, we were very quickly enveloped in mist, but as the ridge line is fairly rocky, it wasn’t hard to follow.  It didn’t take long at all to reach the trig point, but there was no view – in fact by this time we were in near whiteout conditions. 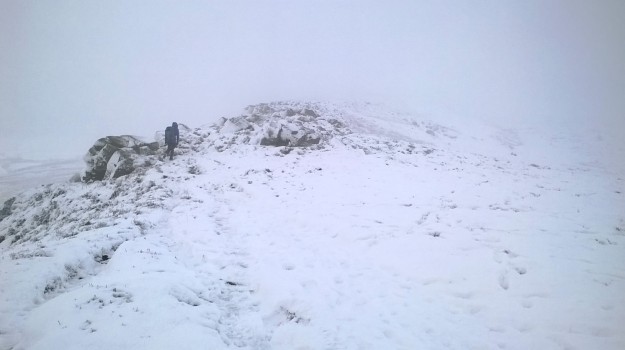 Heading along the ridge 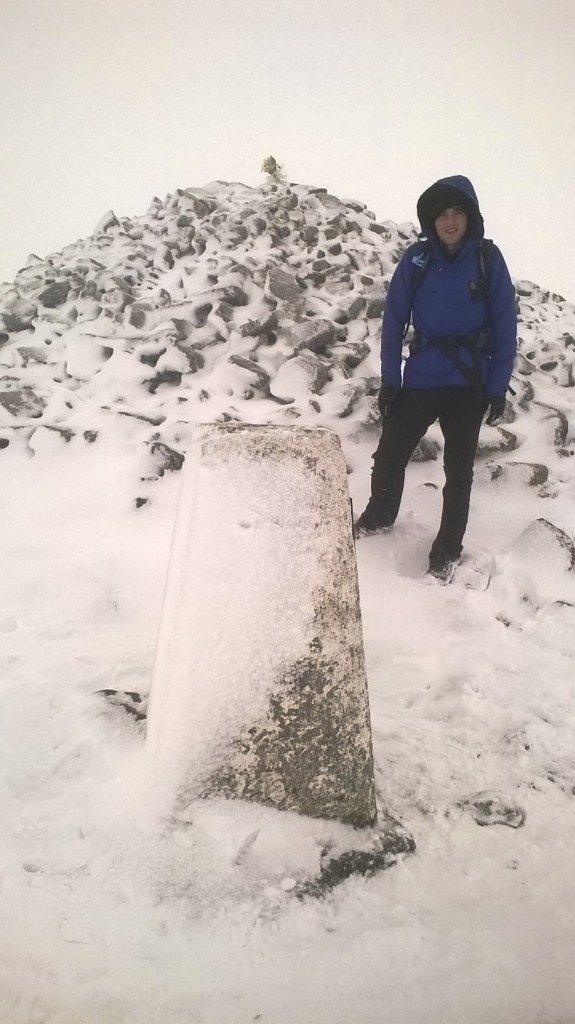 At the trig point with the beacon site behind

Beyond Beamsley Beacon, I had my doubts as to whether or not we should continue, as visibility was very poor.  However, the path was just about visible as a depression in the snow, and my compass bearings confirmed that this was taking us towards Round Hill, so we decided to give it a go.  It was actually very atmospheric and enjoyable, and proof (if any were needed) that you don’t need to go to the Lakes or the Highlands to find challenging navigation (although the consequences of getting lost in a whiteout there would of course be much more serious.) 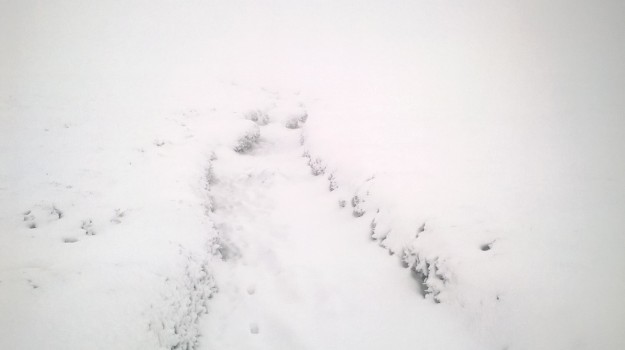 The onward path to Round Hill

Shortly after passing the trig point, we reached the actual summit of Beamsley Beacon (1312 ft), which is named ‘The Old Pike’ on the map, but doesn’t seem to be marked on the ground in any way.  Beyond here, the terrain became much more featureless, with only the occasional boundary stone to act as a marker, including one set into a natural boulder, named by the OS as the ‘Grey Stone.’  Shortly after this, we reached the wall running across the top of Round Hill. 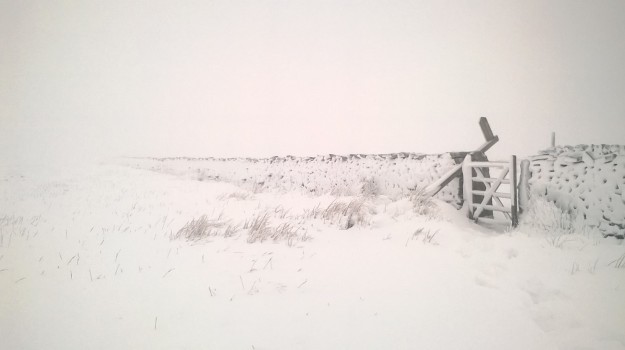 The wall near the summit of Round Hill

The summit of Round Hill (1342 ft) came as something of a disappointment really, as it is marked only by a very small cairn and is really only a slightly higher mound on a moorland plateau.  It’s certainly much less distinctive than Beamsley Beacon, even though the latter is only a subsidiary top of Round Hill.  I can’t say what it is like as a viewpoint, as we could only see mist and snow. 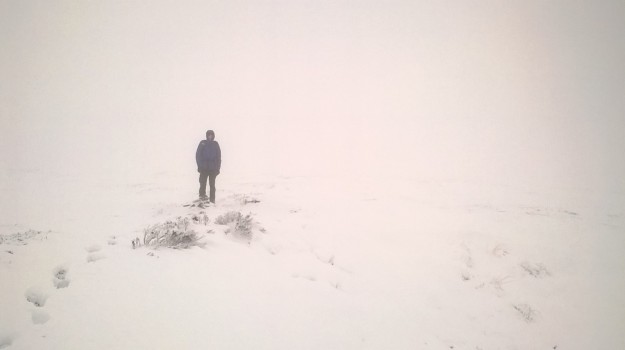 On the summit of Round Hill

The descent from Round Hill was pretty straightforward, initially following a wall, before joining a shooting track and then a lane down into the town.  On the way down, we passed through Middleton Woods, which it would be good to explore on another occasion.

Overall, this was a very enjoyable walk, despite the weather.  Although we were disappointed not to have seen the views from Beamsley Beacon, the day was made memorable by the winter conditions and interesting navigation.  I will now have to go back and do this walk on a day of bright sunshine a blue skies!

All photos by Georgina Collins.